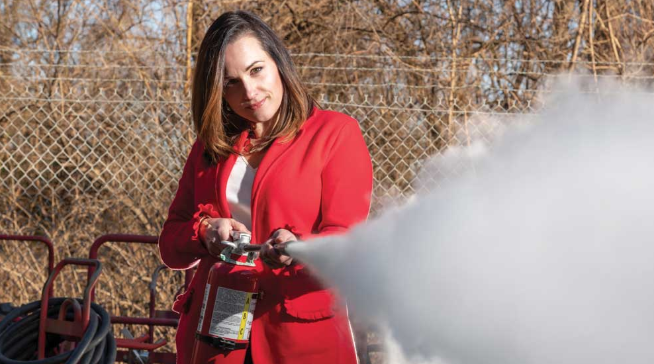 Anna Gavin never would have imagined, or even desired, to take over her family business, Fireline, which installs and services fire protection systems. However, in 2009, life threw her at curve ball with the sudden death of her father. At age 27, with a 5-month-old son, Anna was left with no choice than to work through her grief and take on the reins of a now 73 year old  business. The timing was not ideal. Anna said even as a child she always checking up on fire extinguisher tags – and that the long work weeks she endured in the beginning were very difficult with a younger child back home. “I am really fortunate because I have an amazing husband. He is the reason I was able to survive that first year. He actually quit his job during a recession to stay home with our son for that first year I was running the company,” Gavin says.

Creating Her Own Mark

Fireline Corporation was created in Baltimore in 1947 by John S. Waters, who was the father of famous Baltimore film director, John Waters Jr.), and Anna’s father Stephen Waters succeeded his father as president in 1982.  “I believe Fireline meant more to my father than even my grandfather because he literally grew up with it,” says Gavin, who adds that after her father’s death, she thought that she would run Fireline just for a few months to get it positioned to sell. “But two months in and I was addicted, and there was no going back.” Fireline, which sells sprinkler systems, fire alarms, fire extinguishers, and emergency exit lights (just to name a few), has offices in Baltimore and Leesburg Virginia. Although the company was successful when her tenure as president started, Anna knew that in order for the business to grow in the long term, there were big structural changes that had to be made in areas of sales and leadership, as well as technology. “The necessary changes were scary, but I also got to accomplish some ‘big wins’ early on. There were also some bad mistakes I made, but I made sure I learned from them,” Gavin says.

An Advocate For Women

Anna recognizes that she is a female company president in a mostly male-dominated field. Both industry meetings and conferences she attends are overwhelmingly attended by men. “The No. 1 question I still get when I go to industry meetings is, ‘Does your husband also work in the business?’ There is this assumption that I am not really running the company.” Anna is also proud of her current executive team at Fireline. “I’m really proud that 60% of my executive team is women, which is unheard of in the construction industry. And our service industry, which is the biggest division in terms of revenue, is run by a woman,” Gavin says proudly. Outside of work, Gavin happily supports her alumni, Garrison Forest School, Girls Empowerment Mission and Women’s Education Alliance.

In looking back at her first decade as president, Anna recalls that shortly before her father’s death, he asked her if she wanted to run the company. I told him no; it seemed too difficult a task at the time. My biggest regret is that I never got to tell him that I love running the company. He’d be happy to know that I’m not doing this out of obligation, that I love it as much as he did, and he’d be thrilled about our growth – revenue was $22 million when I took over, and in 2019, it was $35 million.” Its very safe to say, her father would indeed be extremely proud.

Whether you need smoke detectors, fire extinguishers, or an automatic sprinkler system installed at your commercial property, Fireline has you covered. We have been protecting people and property from fire damage since 1947—and our experience shows in our excellent work! We are known for our superb customer service, our expertise, and our reliability. For more information on how we can help your residential or commercial property, visit us online or give us a call at (800) 553-3405. We are located in Baltimore, MD, with a second office in Leesburg, VA. For more fire safety tips, be sure to follow us on Facebook, Twitter, and LinkedIn.