Technology Fires: Is there a Risk? 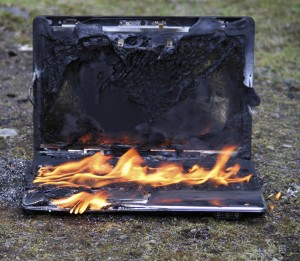 Recently, Apple made a move in the name of safety by issuing a voluntary recall on the Beats Pill XL Speakers. The recall was prompted because there was a risk for the device to catch on fire. While this recall has caused concern in many, it is important to realize that there have been recalls such as this one in the past. While these recalls and fire incidents are rare and shouldn’t cause panic, it is important to be aware of the technology used within a commercial setting to avoid any incidents.

It is also important to know that these recalls are not limited to just technological devices. Within the past year two major car companies, Chrysler and Mercedes-Benz, recalled over one million vehicles combined due to a fire risk. The Consumer Product Safety Commission sees a number of recalls every year for varying items that could pose a potential fire risk.

So have there been any incidents of technology catching on fire?

While these cases are extremely rare, it is still important to be using technology as it is intended. Always use charging devices that have been authorized by your tech company and never use a device improperly.